Tragedy Strikes on Wyton’s ‘Victor’ Day
And the story of another flight becomes a tribute.

We’re indebted to former 543 Squadron “photog” Allan Lowe for a collection of press cuttings recording the tragedyÂ as well as someÂ personal photographs of Squadron Aircraft.
We reproduce here in full the account as published in the Hunts Post of June 30th 1966. You may recall that XM716 was lost asÂ the result of a structural failure during a press demonstration.

The Hunts Post account being particularly poignant as Clive Brown the paper’s editor and author of this account had the thrill of aÂ flight in a Victor some weeks before.
This thoughtfully writtenÂ account also serves to remind us that such an event has an effect far beyond the individuals and station personnel involved. 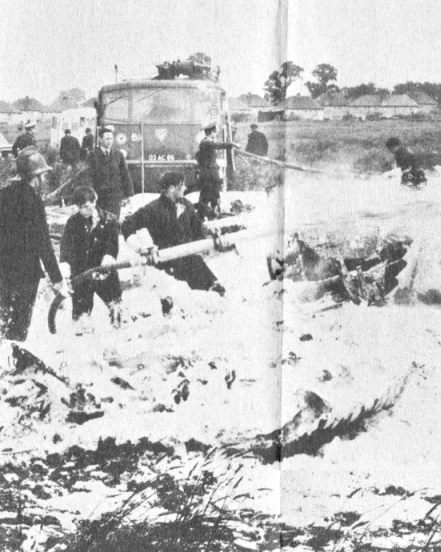 And the story of another flight becomes a tribute.

Stark tragedy struck at RAF Wyton yesterday, the day No 543 Squadron were showing the country’s Press their Handley Page Victor B/Mark 2 strategic reconnaissance aircraft.
One of the new Victors crashed on a demonstration flight a few hundred yards from Warboys shortly after mid-day. It was confirmed later that the crew of four died.

The aircraft took off from Wyton, watched by about 40 national and local newspapermen and photographers. It completed one tight turn outside the perimeter of the airfield to be filmed by cameramen.

It was on its second turn when flames shot from the port wing, still seen clearly from the airfield. The tip of the starboard wing seemed to be pointing directly towards the ground.
Part of the port wing then appeared to break away from the main body of the aircraft and the plane – from what seemed to be less than 500 feet – almost immediately plummeted to the ground.

A large ball of flame blocked part of the horizon and then thick. black volumes of smoke rose from debris.

Â The main body of the aircraft hit the ground only few hundred yards away from some Warbovs houses while other smaller parts were scattered over a large area.
Another portion of the plane came down nearer to Wistow and it was thought that this could have been part of the port wing which had originally caught fire .

Fire engines from RAF Wyton , Huntingdon, St Ives, Ramsey and USAF Alconbury rushed to the crash and quickly put out the bulk of the flames with large quantities of foam.
Several ambulances also rushed to the scene but were of little immediate use as none of the four crewmen had been found at that time.Â RAF Wyton organised teams of men to search the area for parts of the aircraft which might help in deciding the cause of the accident.

Victor Facts & Background
In terms of range, speed , height and operational effectiveness, the new Victors have a performance far in excess of their predecessors , the Valiants, withdrawnÂ last year after serving 543 Squadron at Wyton since 1955.

Improved radar equipment enables the Victor to cover an area of 400,000 square miles in eight hours, unaffected by darkness or cloud.

In two hours, a Victor can cover a sea area equivalent to the United Kingdom. Three Victors can cover the Norwegian Sea, equal in area to France and Spain together in seven hours.

Four Victors can cover the whole of the Atlantic in 6 hours and on a single sortie can produce radar photographs for a mosaic of the whole Mediterranean which would enable every ship to beÂ counted.

The aircraft’s radar gives high definition at short ranges and allows, for example an airfield to be photographed in darkness or through cloud or fog 10 reveal aircraft, runways, hardstandings hangars and vehicles in great detail.

The Victor – not only carries three times more photoflashes for night photography, but is also fitted with improved navigational equipment.Â A new Rapid Processing Radar Unit is fitted providing inÂ·flight processing of a continuous strip record of the radar picture obtained by the aircraft,

A new camera provides a sharper picture over a wide height and speed variation causing the film to move at a speed proportional to the aircraft’s ground speed , but the camera can also be used withÂ focal lengths varying from six inches to 48 inches.

To increase lateral cover, a fan of up to eight cameras can be mounted so that the area covered overlaps on each camera. All is designed to provide photography at the largest possible scale, high resolution and minimum distortion for detailed photographic interpretation .

The squadron is supported by a team of skilled photographers and photographic interpreters , trained to extract maximum detail from air photography.

No 543 Squadron is currently taking part in a new Service trial to evaluate colour photography for intelligence and survey. A fairly recentÂ innovation is infra-red false colour which can given more effective penetration of camoullage than infra-red black and white film.Â Some of this film was used when the squadron helped police investigating the Moors Murders case in November.

Three week s ago Hunts Post News Editor Clive Brown flew in a 543 Squadron Victor. He wrote this story – a story which in the light of yesterday’s tragic happening, becomes a tribute to the menÂ who fly, the dedicated professionals. We publish it as such.

For two hours Delta 63 was our call sign. For two hours we flew in one of 543 Squadronâ€™s Handley Page Victor (SR) Mark Il aircraft.

The sixth? I – was “Number six” A completely inexperienced Number six who, one green interlude apart revelled in the breathtaking power of Victor flight.

It happened when television and still pictures were being taken ready for yesterday when Wytonâ€˜s Victors were on show to the Press.

The plan was for three photographers to fly in a twin-jet De Havilland Domini. The Domini was to rendezvousÂ with a No 543 Squadron Victor over the English Channel, and the Victor was to “formate” on the Domini while the cameramen didÂ their work.

I was to fly in the Victor.

Pre-flight planning. though markedly less than the day’s required for an operational Victor photographic flight, wasÂ complex and careful.

Cloud to provide the background the photographers needed) had to be found – and in an area where the Domini and Victor couldÂ operate without endangering the ever-heavier air traffic over and around Britain.

Manoeuvres to give the photographers the shots they needed had to be agreed, A meeting point fixed. Take-off times agreed. Call signs arranged. Radio frequencies decided. Fuel loads calculated.

Crews of both aircraft were in on this briefing. while across the airfield the ground crew (under their “Chief.” Chief Tech Jeffery} were fuelling and making final checks on the Victor.

Lunch, then kitting out;

Warned that Victor flying can be immensely hot I was fitted for flying suit, helmet, mask. mae west, oxygen and microphone and dinghy.

Two of Delta 63’s crew made clear what I was to do in the (unlikely) event of trouble: how to disconnect oxygen inside the aircraft, howÂ to connect individual oxygen, how to leave the aircraft, how the parachute would operate, how to inflate mae west andÂ dinghy.
An hour to take-off and the crew reached the Victor.

Last words between pilot and ground crew chief and the pilot and copilot boarded to begin the hour’s checks that precede every VictorÂ flight; the checks so many; and so detailed. that they are read from lists by the AEO.

Number six was last in, strapped firmly into a rearward-facing specially installed seat behind pilot and co-pilot with their controls. conventionalÂ looking sticks and pedals surrounded by engine and fuel controls and dozens of twirling white on black indicators.

AEO and the navigators sat abreast, facing backwards and working against a nine-foot area covered with dials. recorders. radar and electricalÂ circuits equipment.

All checked. engines were fired and Delta 63 moved to Wyton’s main runway. Clearance asked and given, and Sqdn-Ldr Hilliard rocketedÂ the Victor forward.

The thrust was immense, and only an out-thrust arm prevented me doubling up as the aircraft unstuck and climbed hard and at theÂ sharpest of angles. In seconds it seemed, the flashing figures of the height recorder beside were at 17,000 feet.

The Victor levelled, and for me the sensation was worse than the climbing. Headphones meantime brought me the checks of the AEO and theÂ acknowledgements: they brought to our last contact with Wyton and our first with the Country’s Eastern Control as we flew towards the Wash.

We turned and headed south of Peterborough, transferred from Eastern Control to Southern Control. and headed by the Isle of WightÂ over the English Channel.

ln level flight, mostly at 26,000 to 27.000 feet, Delta 63 rode impressively steadily. There was vibration. but not too much. There was noise, but not so much as I expected.

At this height it seemed. with town and countryside minute looking through drifting cloud. Delta 63 was almost motionless. But itsÂ cruising speed was 400 knots.

Increasing. majestic cloud below and unbroken blue above gave the feeling of isolation. But the impressionÂ was misleading. as ground controllers constantly relayed heights and courses or other nearby aircraft.

Over the Channel. the crews brought Domini and Victor together: the Domini small, sleek-looking the Victor part-camouflaged. part-white, hugeÂ and bat-like flicked away.

Sqdn-Ldr Hilliard guided the Victor alongside and over the Domini. turned and repeated the process, turned again, and theen flicked awayÂ from the Domini, with constant talk between the two aircraft, with the navigators’ guidance. and while radar and ground surveillance kept watch,Â the difficult job was done: it could not be other than difficult with two aircraft whose speeds varied so.

Wyton (controlling all Wyton, USAF Alconbury and RAF Oakington traffic because of their closeness) delayed Delta 63 on one high-level circuit and then the firstÂ landing approach began.

From a fix-point 9 miles west of Alconbury. Wyton guided the Victor down and gave the orders. Small adjustments of course. slight movements into the correctÂ (downward) giidepath. distances to touch-down: these were passed quickly, quietly to the Victor pilot.

Not until a half-mile to touchdown did the controller tell the pilot to look forward and see the runway. The wheels touched concrete -Â and then the Victor leapt clear to complete another circuit before beginning the whole landing procedure again.

The reason for two landings? Simply a means of providing more landing training, for pilots and co-pilots.

Landed. Delta 63 was taxied back to dispersal. The engines were silenced. The door opened. Fresh. cooler air again.

Ground crew chief and aircrew talked over the Victor’s behaviour. The crew “debriefed.” The ground crew began work on the aircraft andÂ removed the empty crate she carried in her bomb bay: normally the crate would have carried some 12 cameras.

My Victor flight was over: a thrilling two hours not to be forgotten.

Two impressions remained paramount. One was the Victor’s immense,almost almost startling power.Â Most complex. most formidable yet most dignified of aircraft: handsome in the way that strength and efficacyÂ create their own beauty.

The other was of the dedication of the men who flew her. These were, these are men of vast skill and training: men retaining the excitement but recognising the demands of flying: men achieving aÂ peak of professionalism.

It was an honour to fly with them. 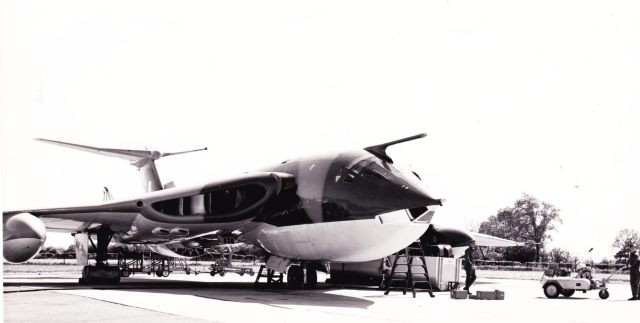 543 Squadron SR2 – Serial Unknown
Note the the camera crate and associated ground equipment alongside the aircraft.

This entry was posted in Uncategorized. Bookmark the permalink.