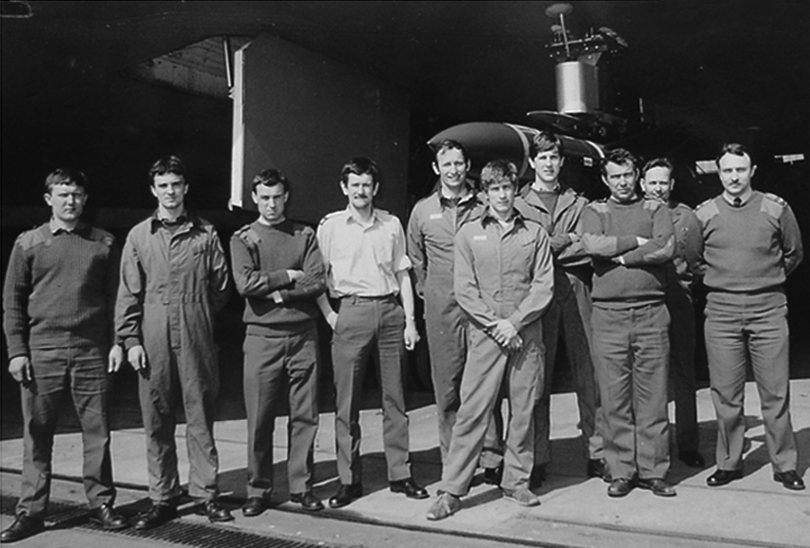 We published a shot some issues ago of the 2 Shrike missile pylons as kindly gifted to N&SAM from IWM Duxford some time ago. These lie at the foot of the cockpit section of Vulcan K.2 XL445. These hefty items had to be designed, fashioned and proof-tested in very quick time to enable Shrikes to be used against Argentine radar ground defences during the famous Vulcan B.2 “˜Black Buck’ bombing/missile raids of the Falklands War.

The AGM-45 Shrike itself was an American anti-radiation missile designed to home in on hostile anti-aircraft radars. Developed by the Naval Weapons Center at China Lake in 1963, it mated a seeker head to the rocket body of an AIM-7 Sparrow. Phased out by U.S. in 1992 and at a later time by the Israeli Air Force (being the only other major user) it was superseded by the AGM-88 HARM missile. The Israel Defense Forces developed a ground-launched Shrike which was mounted it on an M4 Sherman chassis and called the “˜Kilshon’.

“˜WADDO’ SHRIKE MEN  Very fortuitously V.A. member Ricky Durrant showed me the above photograph last year, of the original team at the RAF Waddington Engineering Wing who built the first pylons along while carrying out the electrical wiring etc to bring the whole thing together. The Vulcan wing hardpoints used to attach the pylons were those originally designed to carry the U.S. designed “˜Skybolt’ missile which was cancelled in the 1960’s.

The front of the pylon can be seen to the right as fitted to a Vulcan B.2, with a single missile round suspended below it. The pylons could carry two rounds each besides a Westinghouse AN/ALQ-101 jamming pod on the other wing. The initial “˜Waddo’ pylon as reported in a Flypast web article said that these were replaced later with an improved version (though not stating when) which was built at RAF St Athan. These were said to be more streamlined and being made of aluminium alloy were lighter also. “˜Avro Vulcan Warpaint No. 30′ by Kev Darling refers to them as having “˜aerodynamic fairings’ added to them later – but strangely a curved front end already seems to be in the photo above, though this may not be aluminium.

After looking at some Falklands and post-Falklands shots of the pylons I suspect that the Flixton examples are the later type as they seem quite light and are faired with aluminium (they are not identical as one is for Shrike and the other I guess for the Westinghouse AN/ALQ-101 Jamming Pod). The Jamming Pod carried on the opposing wing was used to jam Argentine radar during the Vulcan’s early “˜Black Buck’ bomb missions against Port Stanley airfield.

MARTEL TESTS  The original Waddington-originated pylons involved 24/7 working and the people involved in the photo above did a grand job. W.C. C G “˜Jeff’ Jefford wrote in 1999 that with growing concern of enemy radar in working up to the “˜Black Buck’ missions it had been decided to adapt the Vulcan for radar suppression by using the only available missile – Martel. Initially these missiles were tested at the Aberporth firing range and passed for service use, with the pylons. Waddington engineers duly designed and manufactured the carrier beam by hanging it from the original “˜Skybolt’ hardpoints and Black Buck pilot Martin Withers spoke later in a RAF Falklands 25th anniversary publication of a Westinghouse ECM pod, “˜borrowed’ from Buccaneer, being “˜slung under the starboard wing using an RSJ from the local builders’ merchants’.

This seems to tie in with Darling’s “˜Warpaint No. 30′ again, who writes of the initial missile fit, that as no pylons were available locally, manufactured items were created using “˜a length of steel joist with standard weapon shackles attached’. The AN/ALQ-101 Jamming Pod was attached to its own particular shaped pylon by a very deep carrier fin, which can be seen on page 29 of “˜Warpaint No. 30′. (Incidentally, this picture indicates that jamming pod and missile wing carriage was not “˜set’ in that the AN/ALQ-101 pod is on the port wing of a Vulcan, whereas a picture on p.28 of Martin Withers “˜Black Buck 1′ Vulcan XM607 shows its own pod on the starboard wing).

CHANGE TO SHRIKE  W.C. Jefford remarked on reservations about Martels’ suitability despite the successful Aberporth Vulcan test-firing and subsequent two-Vulcan deployment to Ascension armed with 1 missile each. This was due to doubts about Martel’s reliability and probability for success with regards to civilians in the target area. It was duly dropped therefore with the U.S. supplied AGM-45 Shrike being chosen instead, given its proven reliability of combat use*. Engineering and indoctrination work began at Waddington on 21st May 1982, with eight Shrikes stated as being looked after at Wideawake Airfield on Ascension Island just 1 week later after familiarisation work- (anti-radar ops later occurring in Black Buck raids 4/5/6 on 28 May/31 May/3 June respectively, after “˜Black Buck 1′ kicked off the bomb operations on 30 April).

Another query crops up in “˜Black Buck 6′ on 3rd June though, with the “˜Flypast’ article quoting the actual Black Buck 6 missile installation being “˜jury-rigged back at RAF Waddington only days before’- Q: Was any missile fitting actually done in-theatre? Also, did this later Black Buck mission Vulcan use the improved lighter pylons made at RAF St Athan? Two Vulcans were selected as Shrike carriers in XM597 and XM598 (primary & secondary). The famous Black Buck 6 “˜Brazil’ op (XM597) featured 2 Shrikes on each wing with the jamming pod removed, along with its own specific pylon.

The two pylon options of Shrike /Jammer or Shrike/Shrike on opposing wings were fitted in the UK as Author Craig Bulman has stated that the five selected Black Buck Vulcans had their own custom-made pylons, though this referred to Waddington-made items only, as opposed to any attributed to RAF St Athan. Normal load was two missiles on the port pylon only. Strangely in its Falklands 25th Anniversary issue, “˜Aeroplane’ said that after Black Buck 3 of May 16th was cancelled, XM597 was due to use Martel AS.37 missiles for Black Buck 4 on 28 May, but it too was cancelled, due to a tanker problem.

At present I’m informed that the chap at centre of the picture was in charge and was called Wally, hopefully more names will be forthcoming in a later issue. Ed.

* This conflicts with the reasons given in “˜Avro Vulcan Warpaint No. 30′, which state a limited number of Martels being available with these being already allocated to the Nimrod fleet anyway.

This entry was posted in Uncategorized. Bookmark the permalink.